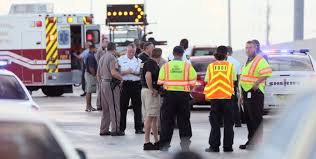 Two young ladies were injured in an accident in Clay County Missouri.  According to the Missouri Highway patrol and the investigating officer Trooper J.E. Givens just shortly before midnight on Interstate Highway 69 at North Oak Trafficway the accident occurred.  The collision occurred when a 2006 Dodge driven by Patrick Washington ran a red light and struck the right rear of a 2008 Chrysler.  The only occupant of the 2008 Chrysler was Kierrhia Knox, age 23, of Kansas City, Missouri.  She was seriously injured and was taken to North Kansas City Hospital by EMS.  There were two other occupants of the 2006 Dodge, Kevin harris age 30, of Kansas City, Missouri and Quiesta Taylor of Kansas City, Kansas.  Both were injured and taken to hospitals for care.

When seriously injured in an accident like this you need to obtain an experienced personal injury lawyer to investigate the facts and determine whom is at fault.   If you or a loved one find themselves in need of an experienced personal injury lawyer please contact the attorneys of Copley Roth and Wilson LLC.  Our firm has extensive experience handling personal injury and wrongful death claims and is here to compassionately assist you in your time of need. If you, a loved one, or a family member has suffered the devastating , and oftentimes tragic consequences of a car accident, please do not hesitate to contact Copley Roth and Wilson, LLC (913-451-9500) to address any questions or concerns you may have.  The initial consultation(s) telephone and in person, are always free.
Posted by Brandan Davies Esq. at 2:23 PM No comments:

How not to bail someone out after a DUI charge...

Some people just don't learn.  A women from Connecticut goes to bail her husband out after he was pulled over for DUI. No problem, he needed help and she was their for him.  The only problem is...She reportedly was drunk driving up to the police station to bail him out.  If this is true this woman has got to be either a complete moron, to go to a police station while drunk or the most brazen women ever.

If you are drunk or breaking the law in anyway by using some sort of mind altering substance,  you might think twice before going to a police station to bail someone out.  Call a bailbonds man for crying out loud!

April Cassidy Velez, 32, was arrested at police headquarters in Hamden, Conn., after driving there to pick up husband Edwin Velez III, 33.

A wife was caught drunk driving as she drove to bail out her husband who had been busted for DUI just hours earlier, it has been claimed.

April Cassidy Velez, 32, was arrested Saturday night after making her way to police headquarters in Hamden, Conn., to pick up Edwin Velez III.  Police say she appeared intoxicated at the front desk and arrested her.  They later found her pickup truck, littered with empty beer cans and wine bottles, parked in a spot reserved for police vehicles.

Her husband, 33, had been detained earlier in the evening after police found his car, empty but with the engine still running, crashed into a snow bank.  He was found at his home, nearby, and failed a sobriety test. He was almost three times over the legal blood-alcohol limit.

Posted by Brandan Davies Esq. at 8:59 AM No comments:

KU firing on all cylinders. A rare sports entry.

Alright, I mostly post about legal articles and accidents and general interesting things happening in the legal world.  However, this time I am going to write a little bit about our team the Kansas Jayhawks.

KU comes out and absolutely blows the Staters out of the field house.  The K-State game was an absolute destruction.  The funny thing is K-State really didn't play all that bad. They had only one more turnover than KU.  They shot 42% from three. (Which was better than KU)  They shot over 70% on free throws.  The fact of the matter is they really didn't play all that bad.

So the teams that beat KU didn't exactly shoot the ball far better than K-State did against KU.

What KU did do this game was:

Collectively over the three losses KU shot 65% from the free throw line.  Against K-State, KU shot 86% from the line.  (Which translated into 19 points)

Against all three teams KU lost to...they were an average +3 rebounds.

So KU had 16 more opportunities to do something with the ball against K-State than they did on average over the other three team they lost to.

3. Shoot the ball better... but not as much as you would think.


Even though KU did shoot better it just goes to show you that the fundamentals mean soo much when it comes to getting the W.  Extra rebounds and making your free throws can win you a lot of games.  This Jayhawk fan was just happy to get a win in what has been a very frustrating couple of days.  It also goes to show you how spoiled we are to by KU fans.  Three losses in a row is just doing business as usual for most of college basketball.  For us.. to say it bluntly...we were freaking out.