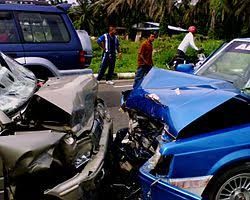 Kathleen Mcmillin, of Harrisonville Missouri was seriously injured in a April 24, 2013 accident.  According to the Missouri Highway Patrol and the investigating officer Sgt. A.J. Bell the accident occurred at 7:10 a.m. on westbound Missouri Highway 2 just one mile east of Route O.  According to the preliminary investigation, driver Justin Saling, age 20, of Paola Kansas was driving a 1999 Ford, Mr. Saling lost control on an ice covered roadway, and slammed into a 2007 Suzuki.  The 2007 Suzuki was owned and driven by Kathleen Mcmillin.  The 1999 Ford was then struck by a third vehicle a 2003 Oldsmobile. Both Kathleen Mcmillin and Jsting Saling were transported to medical facilities for treatment.  Kathleen Mcmillin was transported to Research Medical by Air Ambulance, and Mr. Saling was transported to Cass Regional.  Follow up condition is unknown.

When seriously injured in an incident like this you need to obtain an experienced personal injury lawyer to investigate the facts and determine whom is at fault.   If you or a loved one find themselves in need of an experienced personal injury lawyer please contact the attorneys of Copley Roth and Wilson LLC.  Our firm has extensive experience handling personal injury and wrongful death claims and is here to compassionately assist you in your time of need. If you, a loved one, or a family member has suffered the devastating , and oftentimes tragic consequences of failed security, please do not hesitate to contact Copley Roth and Wilson, LLC (913-451-9500) to address any questions or concerns you may have.  The initial consultation(s) telephone and in person, are always free.
Posted by Brandan Davies Esq. at 8:48 AM No comments:

This article just came across the Kansas City Star.  It looks like a Sedgwick County man was involved in all types of sexual exploits with 4 young girls whom he was supposed to be coaching.  A jury found him guilty of ten counts and he has a sentencing set for June 14.

By: Hurst Laviana of the Wichita Eagle

A former cheer coach is facing the possibility of life in prison after being convicted Tuesday of molesting four of his underage students.


A Sedgwick County jury deliberated just two hours before finding Timothy Wells-Lee guilty of 10 of 11 charges filed against him. Wells-Lee, 29, could get a life term when he is sentenced June 14.  District Attorney Marc Bennett said he was pleased with the verdict.

He said a sexual abuse case in some ways can be more difficult to prosecute than a murder case where there’s a body and other obvious evidence of a crime.  “In a case like this, a young woman has to come forward and relive what hopefully will be the worst moment of her life,” he said.  Wells-Lee was accused of having sexual relationships with girls while they ranged in age from 12 to 14. The 11 counts accused him of fondling, having oral sex and having sexual intercourse with the girls from 2006 through 2008. He was acquitted of the least serious of the 11 charges – a count that accused him of fondling one of the girls when she was 14.

All four girls testified at the trial, as did Wells-Lee. He denied having any sexual contact with three of the girls, and he said his sexual relationship with the fourth girl didn’t begin until after her 16th birthday.  During his closing argument, Bennett asked whether there was any reason for any of the he girls to lie.  “And not just one girl – four,” he said. “Why are they making the accusations? What motive is there?” Bennett urged the jury to consider each count on each girl on its own merits.

“This isn’t a thumbs-up or a thumbs-down to the whole thing,” he said.

Defense lawyer Roger Falk argued in his closing remarks that the dates and times that the girls said the abuse occurred didn’t coincide with actual events. He cited as an example the testimony of one girl who said she had sex with Wells-Lee in his apartment in March 2009 after he had moved to Oklahoma City.

“The dates don’t match up. The acts don’t match up,” he said.  Deputy District Attorney Kim Parker, who had the final comments for the jury, said Wells-Lee used his position as the girls’ coach to take advantage of them sexually.  “He ran the show with these little girls all during a time when he was 10 to 12 years older than they were,” she said. “He took advantage of their immaturity all for his own sexual gratification.”