Came across this on Kansas First News. 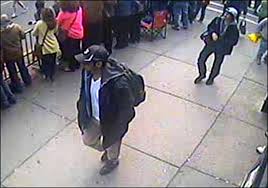 “Mr. Dratel’s unique, specialized experience will help insure that Katie can assist in the ongoing investigation in the most constructive way possible,” DeLuca said in a written statement.  He said Russell, who has not been charged with any crime, will continue to meet with investigators as “part of a series of meetings over many hours where she has answered questions.”  Providence-based DeLuca and Miriam Weizenbaum have been representing Russell, who is from Rhode Island. They specialize in civil cases such as personal injury law.

An FBI spokeswoman wouldn’t comment when asked Wednesday whether Russell is cooperating.
DeLuca has said Russell had no reason to suspect her husband and his brother in the deadly April 15 bombing.  Tamerlan Tsarnaev and Dzhokhar Tsarnaev, ethnic Chechens from southern Russia, are accused of planting two shrapnel-packed pressure cooker bombs near the marathon’s finish line, killing three people and injuring about 260. Tamerlan was killed in a getaway attempt after a gunbattle with police. Dzhokhar, who was captured hiding in a tarp-covered boat outside a house in a Boston suburb, was charged with using a weapon of mass destruction to kill. Their mother has said the allegations against them are lies.

Russell, 24, married Tamerlan Tsarnaev in 2010, and they had been living in Cambridge, Mass., with their 2-year-old daughter when the bombing happened. Russell has been staying in her family’s home in North Kingstown, just south of Providence, since her husband and brother-in-law were identified as suspects in the case.

Hicks, an Australian, spent more than five years at Guantanamo. He pleaded guilty in March 2007 and served a nine-month sentence in Australia.
Posted by Brandan Davies Esq. at 12:35 PM 2 comments: