Man in Kansas City Protests Checkpoints by making a warning sign to drivers.


This week's cover story (Recent article in The Pitch) focused on a couple of Kansas Citians spearheading a movement opposing the use of DUI checkpoints by local law-enforcement agencies. One, Michael Mikkelsen, stands along roads near checkpoints holding a sign warning motorists to turn before going through the roadblock.

In the story, Mikkelsen recalled a Kansas City Police Department officer taking his sign during a protest during the summer.  Mikkelsen spent the rest of the night driving to police stations looking for it. He eventually found his sign at a police gas station on Prospect. This annoyed Mikkelsen, and he filed a complaint with the KCPD's Office of Community Complaints.

The police looked into it, and they conceded that they took the sign. But they decided that their officer didn't violate any department policies. The letter sent to Mikkelsen came with something of a warning: "Furthermore, the officers did not cite you, but they could have for you interfering with them conducting official police business — a DUI checkpoint." Read the whole letter after the jump. 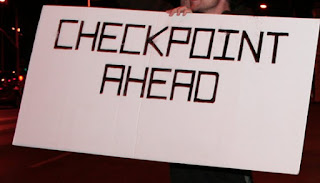 Here is a picture of the Response Letter. 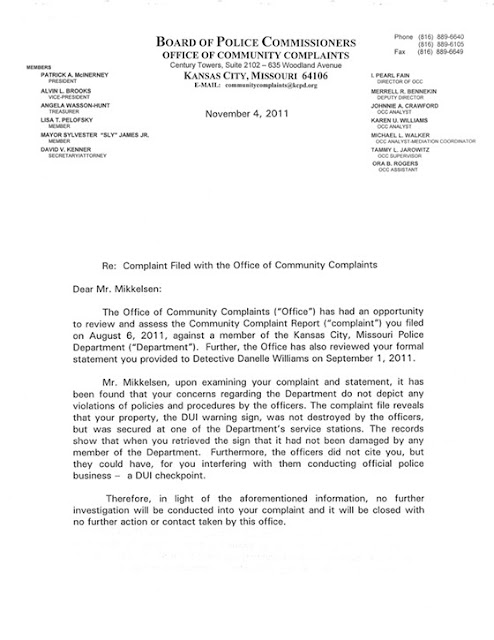 Tell us what you think in the comment section below...Did the police violate this mans right to free speech?  Is this fair?  Should the police be able to randomly stop drivers?﻿
Posted by Brandan Davies Esq. at 8:04 AM