Why do we have the electoral college? 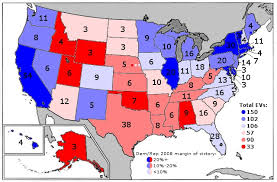 As some of you may know I write for 17 newspapers across Kansas, Missouri, Nebraska, and Iowa.  I author a legal advice article in which people will write in with legal questions.  The website is www.newspaperatttorney.com, this question was submitted by three different people so I thought I would also answer it on this blog as well.

Q: Why do we have the electoral college for presidential elections?

*First let me preface this by saying its not the type of question I generally answer, it is not exactly a legal question.  That being said three different people submitted this question so... I'll do my best.

A:  The electoral college was installed for two primary reasons: (1) It was a compromise between very populated states and states without a large population.  It was a compromise between big states and small states.  It was supposed to keep small states from getting dominated by large states.  The idea was to keep candidates from just going to the populous states and leaving out the small states.  (2) You have to remember when the system was set up over 200 years ago the political, economic, and well everything was different than it it now.  The United States didn't have 20 channels of 24/7 news covering everything and broadcasting it out in HD to your TV, computer, and cell phone.  People were worried that some rouge but wealthy, "crazy person" would trick the electorate into voting for them.  The founders were worried that the average man wasn't smart enough to vote.  They set up the electoral college to act as a buffer between the common man and electing the president.  The idea being to save the people from the people.
Posted by Brandan Davies Esq. at 7:54 AM