Kidnapper sues hostages, says they had a deal to hide him from the police.

Probably one of the most rediculous cases to come across the web in awhile.  I would assume that motion to dismiss would be granted pretty quickly.

In one of the more audacious and head-spinning lawsuits to hit the courts, a fugitive facing a murder charge who took a couple hostage is now suing his victims for not hiding him from police. 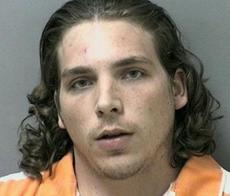 Jesse Dimmick is seeking $235,000 from Jared and Lindsay Rowley in a breach of contract suit involving his 2009 invasion of their home in Kansas, the Topeka Capital-Journal reported. Dimmick claims the couple, newlyweds at the time, agreed to hide him for an unspecified amount of money."Later, the Rowleys reneged on said oral contract, resulting in my being shot in the back by authorities," Dimmick wrote in a notarised legal document filed last month, the paper said.  "As a result of the plaintiffs breech (sic) of contract, I, the defendant suffered a gunshot to my back, which almost killed me," he wrote. "The hospital bills alone are in excess of $160,000, which I have no way to pay."

The Rowleys are awaiting a ruling on their motion to have the suit dismissed, saying they never accepted Dimmick's offer of money and even if they had, their consent would have been given under duress. According to the paper, Dimmick, who was being pursued by police, entered the Rowleys' home and confronted them at knifepoint.  A neighbour said the couple gained his trust by eating snacks and drinking soft drinks with him while watching the movie Patch Adams, then fled when he fell asleep.  Dimmick was convicted of four felonies, including two counts of kidnapping, and is currently being held in Colorado on a murder charge, the paper said.

The Rowleys have filed a suit against Dimmick seeking civil damages in excess of $75,000.

Kidnapper Sues hostages, says they had a deal

(AP)  TOPEKA, Kan. - Can there be no trust between a kidnapper and his hostages?

A man who held a Kansas couple hostage in their home while fleeing from authorities is suing them, claiming they broke an oral contract made when he promised them money in exchange for hiding him from police. The couple has asked a judge to dismiss the suit.

Jesse Dimmick of suburban Denver is serving an 11-year sentence after bursting into Jared and Lindsay Rowley's Topeka-area home in September 2009. He was wanted for questioning in the beating death of a Colorado man and a chase had begun in in Geary County.  The Topeka Capital-Journal reported that Dimmick filed a breach of contract suit in Shawnee County District Court, in response to a suit the Rowleys filed in September seeking $75,000 from him for intruding in their home and causing emotional stress. Dimmick contends he told the couple he was being chased by someone, most likely the police, who wanted to kill him.  "I, the defendant, asked the Rowleys to hide me because I feared for my life. I offered the Rowleys an unspecified amount of money which they agreed upon, therefore forging a legally binding oral contract," Dimmick said in his hand-written court documents. He wants $235,000, in part to pay for the hospital bills that resulted from him being shot by police when they arrested him.

Neighbors have said the couple fed Dimmick snacks and watched movies with him until he fell asleep and they were able to escape their home unharmed.  Dimmick was convicted in May 2010 of four felonies, including two counts of kidnapping. He was sentenced to 10 years and 11 months on those charges. He was later sent to a jail in Brighton, Colo., where he is being held on eight charges, including murder, in connection of with the killing of Michael Curtis in September 2009. A preliminary hearing originally scheduled for Dec. 6 has been rescheduled for April 12. No plea has been entered in the case.

Robert E. Keeshan, an attorney for the Rowleys, filed a motion denying there was a contract, but said if there was it would not have been binding anyway.  "In order for parties to form a binding contract, there must be a meeting of the minds on all essential terms, including and most specifically, an agreement on the price," he wrote.  Keeshan said the contract also would have been invalid because the couple agreed to let Dimmick in the home only because they knew he had a knife and suspected he might have a gun.