Pulled over for Speeding lands Kansas man in jail for pot and over $40K in cash. 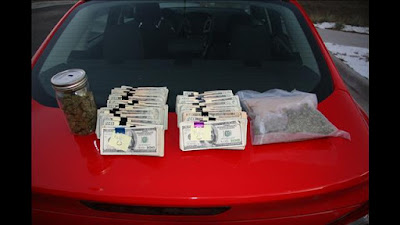 CBS Denver Reports
EAGLE, Colo. (CBS4)-
Two people were arrested after drugs and money was allegedly found in their car when they were pulled over for speeding on Interstate 70.  An Eagle County Sheriff’s Deputy pulled over Erin Colove and Chase Esrich Sunday on I-70 near Eagle. The deputy said the rental car was traveling 97 mph in a posted 75 mph zone. There also was a child in the car. Colove, 25, is from Olathe and Esrich, 22, is from Alton, Mo. The deputy found more than a pound of high grade marijuana and more than $40,000 in the car.

Suspect statements show that the money came from drug transactions. Colove and Esrich were charged with child abuse, possession of more than 12 ounces of marijuana and speeding. The Drug Enforcement Administration is assisting with the investigation.

NBC9 News Reports
EAGLE COUNTY - Two people are charged with child abuse after they were pulled over for speeding near Eagle, Colorado. The traffic stop did not just get them a speeding ticket for going 97 mph in a 75-mph zone. On Sunday morning, an Eagle County Sheriff's deputy pulled over a rental car on Interstate 70. The driver, later identified as Erin Colove, 25, of Olathe, Kans., and the passenger, later identified as Chase Eschrich, 22, of Alton, Mo., had over a pound of high-grade marijuana in the car. They also discovered $40,000 in the car. According to the suspects, they say they got this money from drug transactions. Colove and Eschrich were also charged with child abuse because there was a child in the car at the time when they were pulled over.