8 Ferrrais, a Lamborghini, and a Prius all involved in most expensive car crash ever.

Two pretty obvious conclusions in this article.
1.  A person that drives a Ferrari most likely is going to speed.
2. A bunch of rich people with supercars are probably going to race on the highway.

Drivers of supercars in Japan crash 'were speeding'
By: Julian Ryall  of The Telegraph

Japanese police are blaming the destruction of eight Ferraris and a Lamborghini in a £2.6 million, 14-car crash on Sunday on excessive speed. 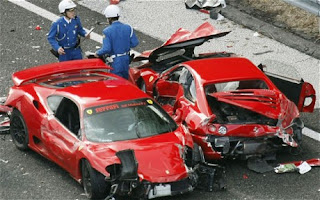 A witness told Japanese television that he saw the parade of supercars travelling at speeds of up to 100mph, which was double the speed limit on the Chugoku Expressway, in southern Japan, due to heavy rain that had made the surface slick.“A group of cars was doing 140kph (87mph) to 160kph,” the unnamed man told TBS News. “One of them span and they all ended up in this huge mess.”

Another motorist described how he narrowly avoided becoming caught in what is likely to be the most expensive car crash outside of a car racing track.“The front car crashed into the left embankment and bounced off towards me,” he said.
In all, a dozen cars have been reduced to scrap metal in the accident, including at least 10 that are among the most expensive and sough-after among collectors.  No fewer than eight Ferraris and a Lamborghini Diablo were among the victims of Sunday morning’s collision, while the other victims were two top-of-the-range Mercedes-Benz, a Nissan GT-R and a Toyota Prius hybrid.

The drivers of the high-performance autos were apparently members of a car collectors’ club out for a less-than-leisurely spin, although it appears that the person behind the wheel of the Toyota Prius was simply in the wrong place when the accident occurred.  Ten men and a woman were admitted to nearby hospitals for treatment, although local police said none of the injuries were life-threatening.  Police declined a request to identify the drivers involved in the crash, although Mitsuyoshi Isejima, the executive officer of the Yamaguchi Prefecture Expressway Traffic Police, was quoted by Bloomberg as describing the drivers as “A gathering of narcissists.”

Police believe the accident was caused at around 10:15am when the driver of a red Ferrari was switching from the right lane to the left lane on a gradual 400-metre curve on the expressway, close to Shimonoseki in the far south-west tip of Japan’s main island of Honshu.  The drivers were reportedly traveling from Kyushu to the city of Hiroshima for a gathering of car enthusiasts.  Local media have reported that the driver of the car that is being blamed for the crash is a 60-year-old businessman from the city of Fukuoka. If he is convicted of dangerous driving that resulted in an accident, he could face a prison sentence of up to three months or a fine of up to Y100,000 (£820).  On the plus side, the car club has not seen its entire collection wiped out at a stroke as at least four other cars managed to avoid becoming entangled in the crash.

Still, it took local police more than six hours to clear the highway of debris and Japanese news programmes have shown repeated shots of the cars scattered across the road.  Footage taken from helicopters above the site showed one of the Ferraris had suffered a crumpled rear-end and had been shunted into the safety barrier alongside the highway. Alongside it, another two red Ferraris had come to a halt alongside each other, although pointing in opposite directions.

A few meters further on, a white sports car had come to a halt with its bonnet forced beneath the crash barrier. Beside the car, four police officers were interviewing two young women and a man.

No one has been yet been charged over the accident.