Speeding Ticket Fun Facts including the Fastest, Most expensive, Etc.

Speeding Tickets are not funny.  They often cause frustration and money to the person receiving them.  On the other hand if could be much worse.   Here are a few fun facts about speeding tickets, enjoy! 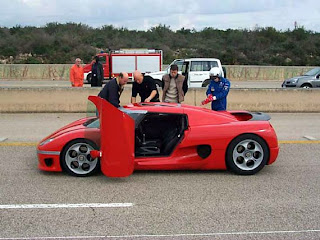 The fastest speeding ticket in the world allegedly occurred in May 2003 in Texas. It was supposedly 242 mph in a 75 mph zone. The car was a Swedish-built Koenigsegg CC8S, which was involved in the San Francisco to Miami Gumball 3000 Rally.


The fastest convicted speeder in the UK was Daniel Nicks, convicted of 175 mph on a Honda Fireblade motorcycle in 2000. He received six weeks in jail and was banned from driving for two years.

The fastest UK speeder in a car was Timothy Brady, caught driving a 3.6-litre Porsche 911 Turbo at 172 mph on the A420 in Oxfordshire in January 2007 and jailed for 10 weeks and banned from driving for 3 years.

The most expensive speeding ticket ever given is believed to be the one given to Jussi Salonoja in Helsinki, Finland, in 2003. Salonoja, the 27-year-old heir to a company in the meat-industry, was fined 170,000 euros for driving 80 km/h in a 40 km/h zone. The uncommonly large fine was due to Finnish speeding tickets being relative to the offender’s last known income. Salonoja’s speeding ticket was not the first ticket given in Finland reaching six figures.

There are many competing claims as to the first speeding ticket ever issued depending whether the claim goes by the first traffic violation or the first paper ticket ever issued. Great Britain may have the earliest claim with the first person to be convicted of speeding, Walter Arnold of East Peckham, Kent, who on 28 January 1896 was fined for speeding at 8 mph (13 km/h) in a 2 mph zone. He was fined 1 shilling plus costs.

A New York City cab driver named Jacob German was arrested for speeding on May 20, 1899 for driving 12 miles per hour on Lexington street in Manhattan. In Dayton, Ohio, police issued a paper ticket to Harry Myers for going twelve miles per hour on West Third Street in 1904.

Another early speeding ticket was issued in 1910 to Lady Laurier, the wife of Wilfrid Laurier, Prime Minister of Canada, in Ottawa, Canada, for exceeding the 10 miles per hour speed limit.

Among the most unpopular tickets, a mention is deserved of the small municipality of Segrate arranging to put a speed limit between two near-by traffic lights synchronized such that drivers were forced to either break the speed limit or pass with the red. It took months before the hated machines were eventually dismantled by the Guardia di Finanza.
Posted by Brandan Davies Esq. at 8:04 AM