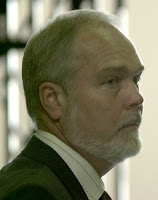 Richard Cuchli, a Kansas City lawyer that was convicted of murdering his law partner in 2002, is a free man.  In what was an obvious and blatant disregard for the criminal justice process, the prosecutors withheld exculpatory evidence and convicted Mr. Cuchli at an unfair trial.  The Court of Appeals has upheld the decision to exclude all evidence that the prosecutor has forcing the DA's office to dismiss the charges.

Irregardless of the defendant's guilt or innocence this just goes to show you that you have to play by the rules, and when you don't sometimes you get caught.

A murder case that roiled the Kansas City legal community for more than a decade has been dropped.

Faced with an appeals court ruling that threw out all evidence in the case, Jackson County prosecutors said Monday that they had dismissed murder charges against a Kansas City lawyer accused in the 2000 killing of his law partner.  The case against Richard Buchli, accused in the beating death of Richard Armitage, had been plagued throughout by problems over evidence being turned over to defense attorneys in a timely manner.  After those problems came to light, Buchli’s 2002 conviction on charges of first-degree murder and armed criminal action was thrown out in 2006.  And in December, as attorneys prepared for a second trial, the Missouri Court of Appeals ruled that the state’s continued failure to provide all the evidence in its possession had prevented Buchli from receiving a fair trial.

Jackson County prosecutors called that ruling a “de-facto dismissal of the case.”

They asked the Missouri Supreme Court to review that ruling, but last week the high court declined to hear the case, allowing the appeals court ruling to stand.With no evidence left to use, prosecutors filed the dismissal Friday.  “We are happy the state has decided to dismiss the charges,” said Richard Johnson, one of the attorneys representing Buchli. “I have no doubt about Richard’s innocence, and I’m glad the case has ended in his favor.”

Because murder has no statute of limitations and the case could someday be refiled if new information turns up, Johnson said that Buchli did not want to make a comment about the dismissal.  Jackson County Prosecutor Jean Peters Baker’s office also declined to comment. Members of the Armitage family could not be reached.  Armitage was 49 when he was beaten to death in May 2000 in the 13th floor office he and Buchli shared in the Kansas City Power & Light Building downtown.  After a Jackson County jury convicted Buchli in 2002, he was sentenced to life in prison.

Much of the trial testimony centered on spatters of Armitage’s blood found on Buchli’s shoes and clothing. The prosecution contended that showed he was the killer; the defense countered that the blood was transferred when Buchli attempted to revive his injured partner.  Another key piece of evidence was a piece of surveillance video that prosecutors used to establish that Buchli had time to kill Armitage and clean up afterward before he was seen leaving for lunch.  Only later was it discovered that prosecutors had an entire daylong surveillance tape that had not been disclosed to the defense before trial. As a result, a Jackson County judge threw out Buchli’s conviction in 2006 after he had served about five years in prison.

The full tape showed that Buchli would have had little time to commit the killing and clean up, potentially refuting the longer “window of opportunity” argument that prosecutors made at trial.  The judge’s ruling was upheld on appeal and in 2008, after all Jackson County judges recused themselves from presiding over the retrial, the case was assigned to Nodaway County Circuit Judge Roger Prokes.  Two years later, after Buchli’s attorneys raised additional concerns about evidence they had not received while preparing for trial, Prokes ordered the exclusion of all evidence.  “The rules have been ignored, this court has been ignored and judicial resources have been squandered,” Prokes said. “The judiciary cannot wait while the state dawdles.”
In his order, Prokes noted a long list of similar “discovery” lapses in the case.

“If this case did not have the history that it does, this court may well impose different sanctions for the state’s current violations,” he wrote.  But Prokes found that after 10 years of litigation, “the state still has inexcusably failed to produce a complete discovery set.”  “A decade is enough time. This court is left with but one conclusion: The only effective sanction is to exclude all of the state’s evidence from trial,” Prokes ordered.  Jackson County prosecutors appealed the order, but in December the Missouri Court of Appeals voted 8-2 to affirm Prokes’ decision.

“There is unquestionably a societal interest in prosecuting cases of murder, but this does not give the state free reign to prosecute this defendant for an indefinite period of time, no matter how many decades it takes the state to comply with its legal obligations,” the appeals court ruled.