This story just came across the KC Star.  It is pretty sad that people out their still fight animals for entertainment. 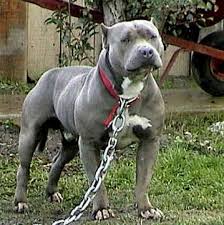 
Federal authorities in Kansas said Monday that they broke up a dogfighting operation that included training pit bulls to fight in Kansas, Missouri and Texas by chaining the dogs to treadmills for hours at a time and using live chickens as bait.


Pete Davis Jr. and Melvin L. Robinson were charged in a federal complaint in the U.S. District Court for Kansas with one count of transporting animals for participation in an animal fighting venture in interstate commerce, according to a federal complaint unsealed Monday. The charge carries up to five years in federal prison and a possible fine of up to $250,000.

The criminal complaint and other online court records did not list lawyers or hometowns for either defendant. Attempts to reach Davis and Robinson at phone listings under their names in Kansas were not successful Monday.  Jim Cross, spokesman for Kansas' U.S. Attorney Barry Grissom, declined to comment on the case Monday. Grissom has a news conference scheduled for later Monday about a “significant criminal investigation” that involves the FBI and the American Society for the Prevention of Cruelty to Animals. Cross would not say if the charges against Davis and Robinson were the subject of that news conference.

The ASPCA, which said it removed nearly 100 dogs involved in the investigation, also helped law enforcement with a major dogfighting investigation in 2009 that led to charges against about two dozen people and the rescue of more than 400 dogs in Missouri, Illinois, Texas, Oklahoma, Iowa and Mississippi.

Tim Rickey, vice president of the ASPCA, said dogfighting remains a major problem.  “The situation has not changed,” he said Monday. “We do not feel like there has been any decline in animal fights. There is better awareness, but there continues to be a lack of enforcement because they're very difficult to investigate.”  Dogfighting, a federal felony, has come under renewed scrutiny since NFL star Michael Vick was convicted and served prison time for running a dogfighting ring. The Philadelphia Eagles quarterback has been working with the Humane Society of the United States to stop organized animal fighting.

In the complaint unsealed Monday in Kansas, an FBI special agent said two sources approached a Missouri law enforcement officer and the FBI about Davis “and his dog fighting ring.” According to the complaint, Davis and Robinson owned the dogs, most of which were pit bulls, and trained them for weekly dogfights in Harrison County, Mo., and fights in April in the Kansas City area and Dallas.
Robinson used a home in Kansas City, Kan., as a training site for the dogs, who were chained to treadmills for “several hours at a time,” the complaint said one of the sources told the FBI. The dogs also had weights on “to strengthen it,” and “caged live chickens were placed in front of each treadmill as `bait,“’ the complaint said.

The complaint said the bodies of three dead dogs were found on the farm the men used in Harrison County – two by one of the FBI informants and one by a Missouri law enforcement officer.
Davis and Robinson discussed betting $20,000 to $30,000 on the dog they were training for the Dallas fight, the complaint said.