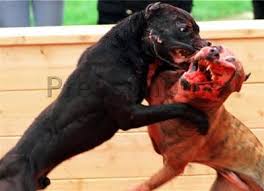 Read more here: http://www.kansascity.com/2013/06/05/4275019/kck-men-enter-guilty-pleas-in.html#storylink=cpy
Pete Davis Jr., 38, and Melvin Robinson, 42, each pleaded guilty in U.S. District Court in Kansas City, Kan., to one count of transporting dogs to participate in animal fighting, according to federal prosecutors.

The charges carry a maximum sentence of five years in prison. Sentencing is scheduled for Sept. 9.
Davis and Robinson was arrested in March after an investigation that began in November 2012 and culminated in a raid of a dogfight in Texas and the seizure of 77 dogs —mostly pit bulls — and six chickens.

According to court documents, the two men owned and trained dozens of dogs, which primarily were kenneled on property in Harrison County, Mo. They also discussed betting $20,000 to $30,000 on fights.

A treadmill for training dogs was erected at Robinson’s house in Kansas City, Kan., and chickens in cages were placed in front of the treadmill as bait, according to court documents. Fights were conducted at the Missouri farm, and investigators followed Davis and Robinson to a planned fight in Texas that was raided in March. The American Society for the Prevention of Cruelty To Animals helped in the investigation and agreed to house and care for the seized animals.