Obama in Osawatomie KS: Take a look at his car and why he can speed through the KC Metro.

As anounced a few weeks ago, President Obama will travel through the Kansas City metro area today on his way to a small town south of Kansas City called Osawatomie.  President Obama is scheduled to land in Kansas City today and travel down to the small town to deliver a speach.  Be assured his motorcade will cause some problems traveling in the metro especially with the fresh snow.  With the presidential visit upon us I thought I would take a minute to explain why the president will get to speed through town, as well as what he will be riding in. 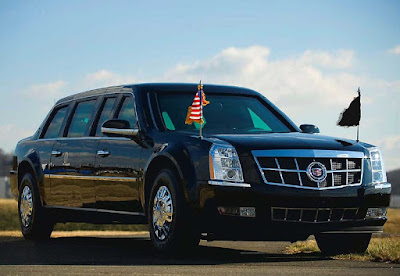 Here is the prediential limo.  Also known as "Cadillac One," "Limo one," or "the Beast."  Now much of it's bells and whistles are classified, but here is what we know about the car.  The current presidential limousine entered service on January 20, 2009. According to the manufacturer, General Motors, the 2009 Cadillac presidential limousine is the first not to carry a specific model name.  The vehicle's outward appearance carries many current Cadillac styling themes, but doesn't exactly resemble any particular production vehicle. The body itself seems to be a modification of the immediately previous DTS-badged Presidential limousines, but the vehicle's chassis and driveline are assumed to be sourced from the GMC Topkick commercial truck.  Many body components are sourced from a variety of Cadillac vehicles; for example, the car apparently uses Cadillac Escalade headlights, side mirrors and door handles. The tail of the car seems to use the taillights and back up lights from the Cadillac STS sedan. Although a price tag has not been announced, there is a rumor that each limousine costs US$300,000.
Most details of the car are classified for security reasons; however, it is known that it is fitted with military grade armor at least five inches thick, and the wheels are fitted with run flat tires that makes the vehicle drivable for a certain length of time if punctured. The doors weigh as much as a Boeing 757 airplane cabin door. The engine is equipped with a Eaton Twin Vortices Series 1900 supercharger system.  The vehicle's fuel tank is leak-proof and explosion resistant.  Due to the thickness of the glass, much natural light is excluded, so a fluorescent halo lighting system in the headliner is essential. The outside crowd is only heard through internal speakers. The car is perfectly sealed against biochemical attacks and has its own oxygen supply and firefighting system built into the trunk. Unseen at a glance are two holes hidden inside the lower part of the vehicle's front bumper, which are able to emit tear gas. The vehicle can also fire a salvo of multi-spectrum infrared smoke grenades as a countermeasure to a rocket-propelled grenade (RPG) or anti-tank missile (ATGM) attack and to act as a visual obscurant to operator guided missiles.  This is fired remotely by the USSS countermeasures Suburban which trails the limo and contains the sensors to detect the launch of such an attack.  The limo is equipped with a driver's enhanced video system which allows the driver to operate in an infrared smoke environment. This driver's enhanced video system also contains bumper mounted night vision cameras for operation in pitch black conditions.  Kept in the trunk is a blood bank of the President's blood type.  Interestingly, there are no key holes in the doors. A special technique, known only to Secret Service agents, is required to gain access to the passenger area