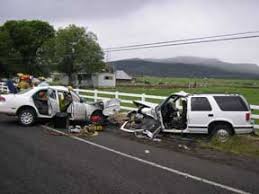 An accident in Franklin county leaves one woman dead and two seriously injured. Vivian Freer, and James Gray were seriously injured and Jo Gray, age 56 was killed in the terrible head-on accident.  Vivian Freer of Leslie, Missouri was transported to Mercy Hospital in Washington and James Gray of Villa Ridge, Missouri was transported to Mercy Medical in Creve Coeur after the accident. Mrs. Jo Gray was taken to Barnes-Jewish Hospital in St. Louis but attempts to save her life were unsuccessful.  According to the investigating officer for the Missouri Highway patrol, Trooper Kordel Gibson on December 29, 2012 at approximately 11:55 pm on Route AT about .3 miles east of Route M  the accident occurred.  The Police report states that the accident took place when a 2006 Chevrolet Trailblazer operated by Vivian Freer crossed the center lane and struck a 2002 Chevrolet Blazer operated by the now deceased Jo Gray. The 2006 Chevy hit the 2002 Chevy head on. It is unknown at this time why Ms. Freer crossed the center line.

If you, a loved one, or a family member has suffered the devastating , and oftentimes tragic consequences of a car accident, please do not hesitate to contact Copley Roth and Wilson, LLC (913-451-9500) to address any questions or concerns you may have.  The initial consultation(s) telephone and in person, are always free.  We invite you to call and speak with our experienced personal injury lawyers in your time of need
Posted by Brandan Davies Esq. at 8:01 AM