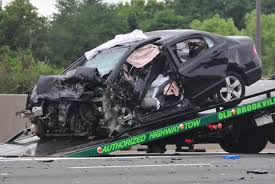 An accident in Finney county leaves one young man dead and two seriously injured.  Martin Heiman, and Robert Heiman were seriously injured and Matthew Anderson, age 27 was killed in the bad weather accident.  Martin Heiman of Hutchison, and Robert Heiman of Garden City, were both transported to St. Catherine's Hospital after the accident. Mr. Anderson was taken to St. Catherine's but attempts to save his life were unsuccessful.  According to the investigating officer for the Kansas Highway patrol, on December 25, 2012 at approximately 4:40 pm on U83 about one mile south of Garden City, Kansas the accident occurred.  The Police report states that the accident took place when a 2005 Honda Civic operated by Mathew Anderson was attempting to pass another vehicle on the bridge.  He realized he did not have enough time to pass and veered back into his lane.  When he did this he over corrected and lost control on the slick road surface of the bridge.  The 2005 Honda Civic then struck the 2007 Mercury Milan operated by Martin Heiman head on. It is unknown at this time why Mr. Anderson choose that particular spot to pass.

If you, a loved one, or a family member has suffered the devastating , and oftentimes tragic consequences of a car accident, please do not hesitate to contact Copley Roth and Wilson, LLC (913-451-9500) to address any questions or concerns you may have.  The initial consultation(s) telephone and in person, are always free.  We invite you to call and speak with our experienced personal injury lawyers in your time of need
Posted by Brandan Davies Esq. at 7:35 AM