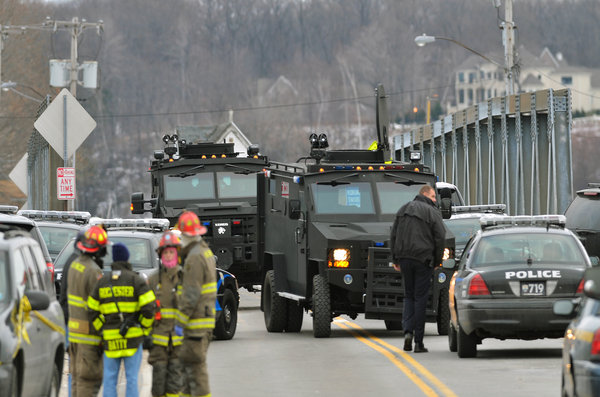 This is just one of the sickest things I have seen in awhile.  People have absolutely just lost their minds. To shoot people out there trying to help is just so sad.  I hope that the media never says a word about the person who did this.  In my opinion, the media that popularizes these terrible people committing these crimes is partially guilty for promulgating this absolute madness.

Here is the article in the New York Times.

Four firefighters were shot — two fatally — after apparently being lured to an early morning blaze on Monday in Webster, N.Y., a lakefront town about 12 miles northeast of Rochester, officials said.

The suspected assailant also died there of a self-inflicted gunshot wound, the town’s police chief, Gerald L. Pickering, said.  “It does appear that it was a trap that was set,” he said of the blaze that drew the firefighters about 5:30 a.m.  After starting the fire, he said, Mr. Spengler assumed a “position of cover” and began firing, sniper-like, at the first responders. Strong Memorial Hospital in Rochester said two firefighters were in “guarded condition.” The two others died at the scene, Chief Pickering said.  He seven homes were destroyed and had not yet been searched.  “We don’t know if there are any additional victims in those homes,” he said.

The gunman was identified as William Spengler, 62, who lived at 191 Lake Road, where the fire began, and had served about 18 years in prison for killing his grandmother, the police chief said. Officials said he was imprisoned until 1998, and had remained on supervised parole until 2006.  Mr. Spengler’s motives were unclear, though Chief Pickering said “there were certainly mental health issues involved.”
Chief Pickering said an on-duty Webster police officer exchanged “very brief” gunfire with Mr. Spengler and “in all likelihood saved many lives.”  But, he said, authorities scoured the area for hours trying to locate the gunman before he was found dead about 11 a.m. “It’s dark. We’ve got this raging inferno with black smoke everywhere,” he said. “We flooded the crime scene with officers.”

As for whether someone else might have been in the burned house where Mr. Spengler lived, Chief Pickering said that “it is possible that a sister of Mr. Spengler is unaccounted for.” He said “at least a rifle was used” by Mr. Spengler to fire at the first responders. He noted that as a felon, Mr. Spengler was not authorized to possess weapons.  The firefighters were from the West Webster Fire Department, about four miles from the blaze, and were believed to be volunteers.  One of the firefighters was “able to flee the scene on his own,” Chief Pickering said. “The other three were pinned down at the location.”

As he recited the names of those killed and wounded, Chief Pickering repeatedly choked up. One of the deceased, Michael J. Chiapperini, was a police lieutenant in the Webster Police Department; the other, Tomasz Kaczowka, was a 911 dispatcher for Monroe County.  “These people get up in the middle of the night to go put out fires,” he said. “They don’t expect to be shot and killed.” John Ritter, an off-duty police officer from Greece, N.Y., who happened to be driving by and stopped to help, suffered shrapnel wounds from the shooting, Chief Pickering added. The firefighters who were injured, both volunteers, were identified as Joseph Hofstetter and Theodore Scardino.Gov. Andrew M. Cuomo said the State Police and the Office of Emergency Management were working with local officials. He said Webster firefighters and the police had initially responded to a car fire.

“New York’s first responders are true heroes as they time and again selflessly rush toward danger in order to keep our families and communities safe,” Mr. Cuomo said. “Volunteer firefighters and police officers were injured and two were taken from us as they once again answered the call of duty. We as the community of New York mourn their loss as now two more families must spend the holidays without their loved ones.”  The fire continued to burn through the morning, spreading to several homes, before being brought under control.  Chief Pickering added that, with authorities establishing and investigating the crime scene, “it took a while to make it safe” for firefighters to move in and combat the flames.

The site of the fire runs along a narrow spit of land that divides Lake Ontario from Irondequoit Bay. The houses in the affected area are detached wood-frame homes with yards, across the street from the lake. Chief Pickering likened the area to “a little vacation nest.”  “We have very few calls for service in that location,” he said.  Michael D’Amico, a contractor who has lived on Lake Road for 20 years, said residents were evacuated to a school. “We still can’t go back,” he said. The area is home to many summer houses, he said, but some people lived there year-round.  “A lot of times I get woken up by gunfire, but I don’t think too much of it,” Mr. D’Amico said, noting that the area often attracted duck hunters.  “Usually the gunfire comes from the lake or the bay,” he added. “This was from further down the road.”

Vince DiPrima, an assistant manager at Bill Gray’s, a diner across the bridge from the fires, said some firefighters had visited his restaurant on Monday morning. He gave them some coffee.  “The stuff that happened in Connecticut the other day, and then this,” Mr. DiPrima said.  By noon, State Police helicopters swarmed overhead. Emergency vehicles zipped past.  “It’s a weird feeling,” Mr. DiPrima said. “It’s Christmas Eve.”
Posted by Brandan Davies Esq. at 1:21 PM